If Manufacturing is the Answer, What is the Question? 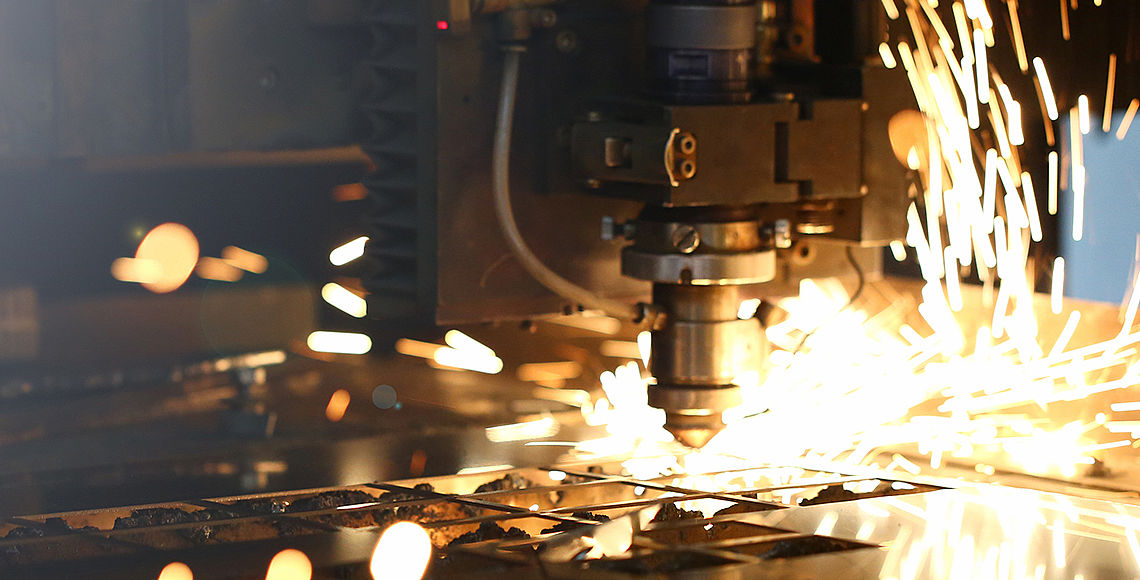 Australia has enjoyed 29 years of prosperity. COVID-19 has brought it to an end. I would hypothesise that Australia is different now and we need to behave differently. This is the opportunity of a millennium. It involves a major paradigm shift in our thinking.

NOW is the time to move:

FROM: A nation pursuing mediocrity, wallowing in recreation and lifestyle, and focussed on internal debates about who sits in which seats?

TO: A smart Sovereign Eurasian Nation - a world leader in selected industries and technologies - a strategic business hub in Asia.

There is necessarily urgent work to do to address COVID-19, maintain and sustain the health of Australians and getting the Australian system working again in whatever form that emerges.

In my recently published book, Innovation in Australia - Creating Prosperity for Future Generations, I have completed an overview of the cultural challenges in the Australian business system specifically concerning innovation in Australia. I have reviewed our history; documented an assessment of our current performance; presented the brutal facts and made some proposals about a pathway forward - a new narrative for Australia. The pathway involves several radical thoughts which are specifically relevant to our current crises. None of them is a quick fix.

When I wrote the book, I had no concept of COVID-19 and its impact on the world and Australia. It is now even more urgent that we consider some of the ideas in this work.

Renowned Australian of the Year, Professor Ian Frazer said in his book review:

"This book sets out to shock. I read it in two hours, and believe that those two hours would be well spent for any person, whether politician, board member, university vice-chancellor, trade union leader, employee or high school graduate, who aspires to shape the future of this country in the global village positively in the 21st century."

COVID-19 has destroyed that sense of smugness and complacency that comes with extended periods of success. As John Howard said, "Australians are entitled to feel relaxed and comfortable". Not anymore!

As I have previously written, there is little evidence anywhere in history that human systems can sustain high levels of performance for long periods. It was inevitable that something would challenge our golden run. As it happens, it is an invisible force which is challenging the world.

We have had to work hard, as I understand it, to guarantee that our healthcare workforce has appropriate clothing (PPE) and technology to manage in this extraordinary time and to ensure our health infrastructure can cope with a threatened, massive increase in demand. Today it appears, Australia is in a good position but is cautious about what's next? It is not over and, it may not be over for a long time. The government has implemented radical and positive responses - decisions made, which in the light of our history, are incomprehensible BUT needed.

Leaders in all spheres are stepping up and need support as we negotiate this time.

In the fulness of time, there will be reviews and studies about what happened, how it happened, how well prepared we were, how we responded and were the results what we expected. Specifically, the critical question is, what are we learning? As a nation, we are participating in a living social experiment. No one has lived through anything like this before, so every step is a step into the unknown. As a learning event, it is both devastating for many and profound. We know that for individuals, major learning happens around big life events - deaths in family, losing jobs, loss of businesses, major health crises. It is when we discover who we really are.

For Australia and Australians, the learning is profound. It will shift the thinking for future generations. It is an opportunity to reconstruct, reshape and recreate Australia. It is a time to think about a multi-generational view - to lift ourselves from the comfort and complacency of the last few decades. Given our culture, is that possible?

There are other countries that have a multi-generational view of the future. "Japanese business leaders and Boards of Directors think about industries in multi-decade time spans instead of three to five years periods so common in Australia." - Financial Review 17-18 August 2019

It appears we have much to learn and we are learning on the run. One very positive initiative is the establishment of the National Cabinet - which is a breath of fresh air compared to some of the other institutions we have in place.

A National Cabinet is a huge opportunity to think and plan differently. We are living in a system which was designed 120 years ago - a different world. A new different sort of leadership structure may be possible. Even a new structure to reflect the reality that it is the 21st Century.

In recent days, much has been written about the absence of manufacturing capacity in certain vital areas of industry and our dependence on other countries for crucial medical equipment and other supplies. There are early discussions about the opportunity to fix the problem quickly. Who could argue with that? Manufacturing has been declining for many years - it is a low percentage of GDP.  When GMH, the last of our car manufacturers closed, there was a short period of national mourning. And we moved on.

Since the mid-70s, globalisation and the pursuit of efficiency (reduction of costs) are the dominant paradigms. In the significant business countries of the world, the emergence of shareholder value as the purpose of business has created a force which in many ways is destructive to national independence and sovereignty. It creates a form of short-termism which dominates the business system. It has become a race to the bottom. Outsource as much as we can for the cheapest cost, and have it delivered just in time. In times of crises such as the one we are in right now, these philosophies have left us vulnerable. This time it appears suppliers (countries) are thus far obliging, but it may not always be so.

Surely business and government in Australia have a strategic imperative Australian Independence - resilience is the new buzz word. In times of emergency, what do we need to control? One platform is the need to ensure Australia has an industry base which ensures our safety and security over decades, even centuries. A robust manufacturing capacity is important.

There was some great work in the late 80s and early 90s on microeconomic reform. Floating the dollar, removal of Tariffs, GST, Enterprise Bargaining, the Future Fund - but it stopped. It's hard to believe that those who initiated these changes imagined that reform would end or that some industries would outsource vital parts of our supply chain to other countries. For 20 years, we have lived in a dream time bubble. It is a "look how clever we are" syndrome!

I have done some basic research on innovation in Australia and there are a number of systemic issues we face in commercialising our research. A limited manufacturing capacity is just one.

Andrew Liveris (the Australian former Chairman and CEO of American multinational Dow Chemical Company) has suggested that most global innovation comes from the manufacturing sector.

"Innovation is most successful when it goes hand in hand with production, particularly in the advanced manufacturing sector. In fact, a recent McKinsey study found that manufacturing accounts for up to 90 per cent of private sector R&D in major manufacturing economies.

This is one of the reasons I have championed advanced manufacturing in every corner of the world for many years. Because the solutions we seek... the solutions that will drive sustainable growth and human progress... will be found at the intersection of innovation and production.

Australia, to be frank, is behind in this area. As you know, we have allowed our manufacturing sector to shrivel in recent years... settling for an economy defined by exporting natural resources.

Do not get me wrong - this approach has produced incredible growth in the short term. However, overemphasising extraction and export - at the expense of other priorities - has clear downsides."

The link between innovation and the manufacturing sector (only 6.3% of the economy), is critical.

When we come through this, the challenges are enormous. This current burst of energy to rebuild manufacturing is essential, but it is not a one-year or three-year project. Industry building is a multi-generational strategy made up of multiple large and small strategies and plans. Who in this country is looking at the long-term scenarios? There are countries in the world who do - we are not one. In my view, both business and government are myopic, lacking in imagination and self-interested e.g. (the three-year electoral cycle). It is a cultural problem.

Tradition, custom, ideology and fundamentalism are severe limitations on our capacity to move forward. Some years ago, I spent some time in Kuala Lumpur at a conference, and I discovered this table whilst having coffee and reading a local business paper in the foyer of the hotel. It highlights the time frames involved in building an industry.

A simple reading of this table suggests that:

From assembly to higher-level manufacturing 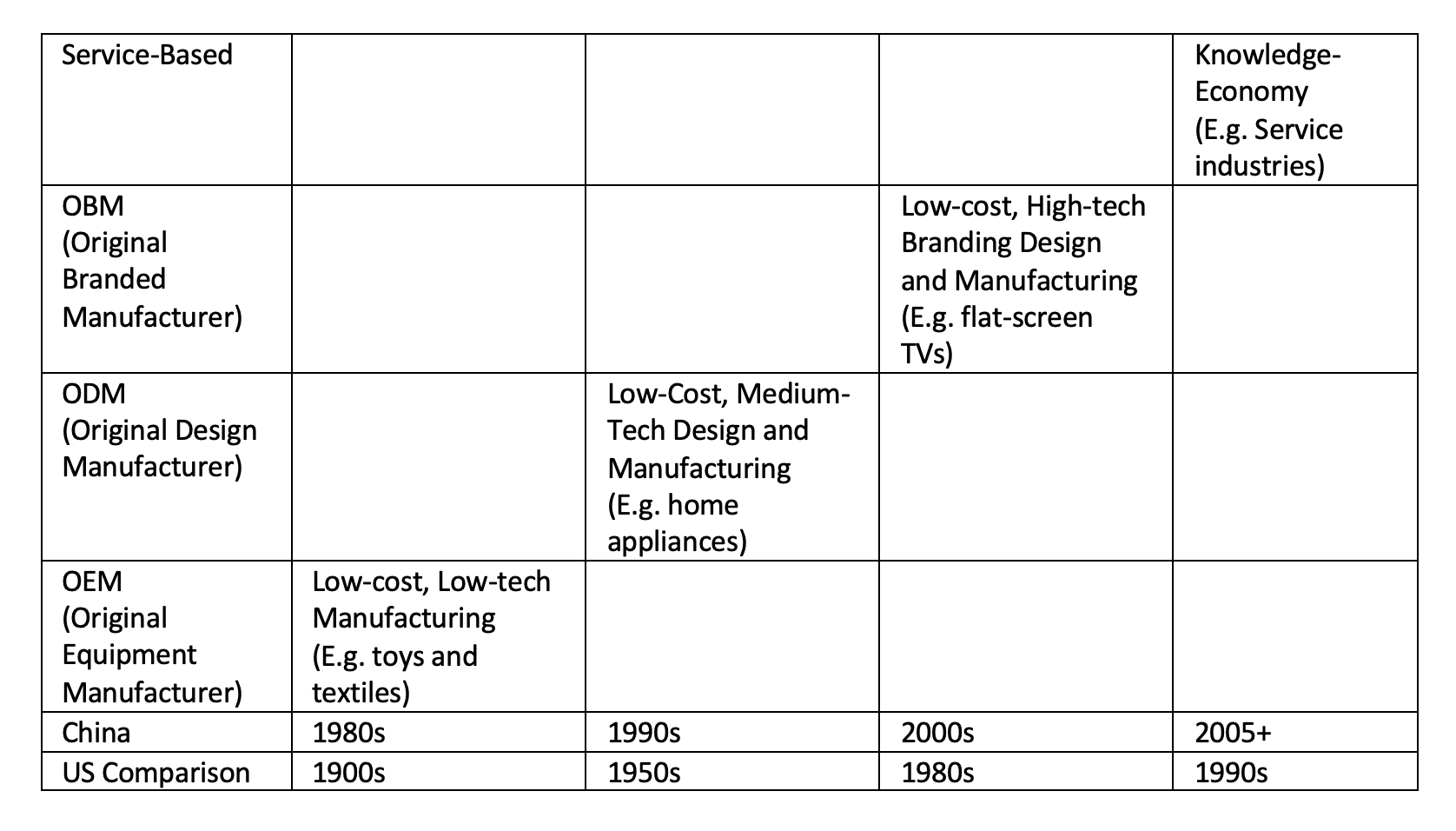 Any decisions we make over the next 3 to 5 years will require much discussion and debate, and the debate needs to be had in the context of a larger vision. We are in a region dominated by cultures very different from ours. China, Indonesia, India and Vietnam all have the capacity to be influential in our future.

It seems China (our major trading partner) has a very long-term view evidenced by:

Japan has also had a long-term view and while they have internal issues with their economy and population decline, it is no mistake on their part that they have shareholding in many Australian businesses.

So if manufacturing is the answer, what is the question?

I submit that there are many questions, and I have articulated some of them in my book referred to earlier.  I've also talked about the importance of vision-driven ('big picture') planning. It requires us to consider how we see Australia evolving over the next 50 years:

We need leaders with: